How Do You Detect A Neutrino?

Another Don Lincoln video, and this time, it is on a topic that I had a small involvement in, which is neutrino detection.

My small part was in the photomultiplier photocathode used for detection of Cerenkov light that is emitted from such a collision between the "weak boson" and the nucleus. We were trying to design a photodetector that has a large surface area as compared to the current PMT round surface.

In any case, this is a good introduction to why neutrinos are so difficult to detect.

Physicist Charles Kittel passed away this past May 15th, 2019.

This is one of those names that will not ring a bell to the public. But for most of us in the field of condensed matter physics, his name has almost soared to mythical heights. His book "Introduction to Solid State Physics" has become almost a standard to everyone entering this field of study. That text alone has educated innumerable number of physicists that went on to make contribution to a field of physics that has a direct impact on our world today. It is also a text that are used (yes, they are still being used in physics classes today) in many electrical engineering courses.

He has been honored with many awards and distinctions, including the Buckley prize from the APS. He may be gone, but his legacy, influence, and certainly his book, will live on.

The Geekiest T-Shirt That I've Ever Bought

I just had to get this one. I found this last week during the members night at Chicago's Adler Planetarium. 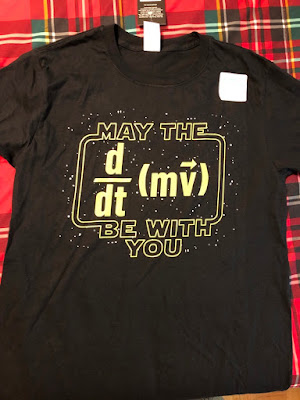 The people that I were with of course knew that this is referring to "force", but they didn't get the connection. So I had to explain to them that Newton's 2nd law, i.e. F=ma can be expressed in a more general form, i.e. F = dp/dt, where p is momentum mv. Thus

Of course, I'm not surprised that most people, and probably most of Adler's visitors, would not get this unless they know a bit of calculus and have done general physics with calculus. Maybe that was why this t-shirt was on sale! :)

Maybe I'll wear this when I teach kinematics this Fall!

I was at the Chicago's Field Museum Members Night last night. Of course, there were lots of fascinating things to see, and wonderful scientists and museum staff to talk to. But inevitably, the experimentalist in me can't stop itself from geeking out over neat gadgets.

This was one such gadget. It is, believe it or not, a table-top laser ablation unit. It is no more bigger than shoe box. I was surprised when I was told what it was, and of course, I wanted to learn more. It appears that this is still a prototype, invented by the smart folks at ETH Zurich (of course!). The scientist at Field Museum uses it to do chemical analysis on trace elements in various objects in the field, where the trace elements are just too minute in quantity that x-ray fluorescence would not be effective. 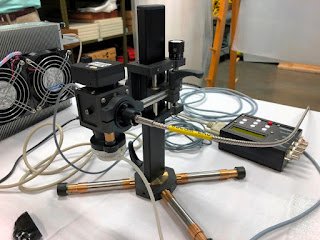 Now, you have to understand that typically, laser ablation systems tend to occupy whole rooms! It's job is to shoot laser pulses at a target, causing the evaporation of that material. The vapor then typically will migrate to a substrate where it will form a thin film, or coat another object. People use this technique often to make what is known as epitaxial films, where, if suitably chosen, the new film will have the same crystal structure as the substrate, usually up to a certain thickness.

So that was why I was fascinated to see a laser ablation kit that is incredibly small. Granted, they don't need to do lots of ablating. They only need to sample the vapor enough to do elemental analysis. The laser source is commercially bought, but the unit that is in the picture directs the laser to the target, collects the vapor, and then siphon it to a mass spectrometer or something to do its analysis. The whole thing, with the laser and the analyzer, fits on a table top, making it suitable to do remote analysis on items that can't be moved.

And of course, as always, I like to tout of the fact that many of these techniques originate out of physics research, and that eventually, they trickle down to applications elsewhere. But you already know that, don't you?

Why Does Light Bend When It Enters Glass?

Don Lincoln tackles another "everyday" phenomenon. This time, he tries to give you an "explanation" on why light changes direction when it goes from one medium to another, and why some of the more popular explanation that have been given may be either incomplete, or wrong.

Certainly, any undergraduate physics student would have already dealt with the boundary conditions using Maxwell's equations, so this should be entirely new. However, he skipped rather quickly something that I thought was not handled thoroughly.

The continuity of the parallel component of E to the boundary is fine. However, Lincoln argued that the reason why the perpendicular component of the F field is shorter in glass is due to the polarization of the material, and thus, the sum of the light's E-field and the E-field from the polarization will cause the net, resultant E-field to be shorter.