Hey, if you have time to burn, why not build your own LEGO particle accelerator?

This is a working particle accelerator built using LEGO bricks. I call it the LBC (Large Brick Collider). It can accelerate a LEGO soccer ball to just over 12.5 kilometers per hour. Watch the follow up video to see how it works: http://youtu.be/sjRPTDgjM0Q If you would like to see this potentially become an official LEGO set be sure to head over to LEGO Ideas and support the project! https://ideas.lego.com/projects/86253 You can find more information about how it works on my website at http://jkbrickworks.com/lego-particle...

A very entertaining video to watch if you were not at this year's Physics Slam.

Anyone else here on Research Gate?

First of all, let me first declare that I'm not on Facebook, don't have a Twitter account, etc.. etc. This blog is my only form of "social media" involvement in physics, if you discount online physics forums. So I'm not that into these social media activities. Still, I've been on Research Gate for several years after being invited into it by a colleague.

If you're not familiar with it, Research Gate is a social media platform for ... you guessed it ... researchers. You reveal as much about yourself as you wish in your profile, and you can list all your papers and upload them. The software also "trolls" the journals and online to find publications that you may have authored and periodically asks you to verify that they are yours. Most of mine that are currently listed were found by the software, so it is pretty good.

Of course, the other aspect of such a social media is that you can "follow" others. The software, like any good social media AI, will suggest people that you might know, such as your coauthors, people from the same institution as yours, or any other situation where your name and that person's name appear in the same situation or document. It also keeps tabs on what the people that follows you or ones that you follow are doing, such as new publications being updated, job change, etc.. etc. It also tells you how many people viewed your profile, how many read your publications, and how many times your publications have been downloaded from the Research Gate site.

Another part of Research Gate is that you can submit a question in a particular field, and if that is a field that you've designated as your area of expertise, it will alert you to it so that you have the option of responding. I think this is the most useful feature of this community because this is what makes it "science specific", rather than just any generic social media program.

I am still unsure of the overall usefulness and value of this thing. So far it has been "nice", but I have yet to see it as being a necessity. Although, I must say, I'm pleasantly surprised to see some prominent names in my field of study who are also on it, which is why I continued to be on it as well.

So, if you are also on it, what do you think of it? Do you think this will eventually evolve into something that almost all researchers will someday need?

"Should I Go Into Physics Or Engineering?"

I get asked that question a lot, and I also see similar question on Physics Forums. Kids who are either still in high school, or starting their undergraduate  years are asking which area of study should they pursue. In fact, I've seen cases where students ask whether they should do "theoretical physics" or "engineering", as if there is nothing in between those two extremes!

My response has always been consistent. I why them why can't they have their cake and eat it too?

This question often arises out of ignorance of what physics really encompasses. Many people, especially high school students, still think of physics as being this esoteric subject matter, dealing with elementary particles, cosmology, wave-particle duality, etc.. etc., things that they don't see involving everyday stuff. On the other hand, engineering involves things that they use and deal with everyday, where the product are often found around them. So obviously, with such an impression, those two areas of study are very different and very separate.

I try to tackle such a question by correcting their misleading understanding of what physics is and what a lot of physicists do. I tell them that physics isn't just the LHC or the Big Bang. It is also your iPhone, your medical x-ray, your MRI, your hard drive, your silicon chips, etc. In fact, the largest percentage of practicing physicists are in the field of condensed matter physics/material science, an area of physics that study the basic properties of materials, the same ones that are used in modern electronics. I point to them many of the Nobel Prize in physics that were awarded to condensed matter physicists or for invention of practical items (graphene, lasers, etc.). So already, the idea of having to choose between doing physics, and doing something "practical and useful" may not be mutually exclusive.

Secondly, I point to different areas of physics in which physics and engineering smoothly intermingle. I've mentioned earlier about the field of accelerator physics, in which you see both physics and engineering come into play. In fact, in this field, you have both physicists and electrical engineers, and they often do the same thing. The same can be said about those in instrumentation/device physics. In fact, I have also seen many high energy physics graduate students who work on detectors for particle colliders who looked more like electronics engineers than physicists! So for those working in this field, the line between doing physics and doing engineering is sufficiently blurred. You can do exactly what you want, leaning as heavily towards the physics side or engineering side as much as you want, or straddle exactly in the middle. And you can approach these fields either from a physics major or an electrical engineering major. The point here is that there are areas of study in which you can do BOTH physics and engineering!

Finally, the reason why you don't have to choose to major in either physics or engineering is because there are many schools that offer a major in BOTH! My alma mater, the University of Wisconsin-Madison (Go Badgers!) has a major called AMEP - Applied Mathematics, Engineering, and Physics - where with your advisor, you can tailor a major that straddles two of more of the areas in math, physics, and engineering. There are other schools that offer majors in Engineering Physics or something similar. In other words, you don't have to choose between physics or engineering. You can just do BOTH!

The Physics of Thor's Hammer

Not that you should take any of these seriously, but some time, entertainment reading like this can be "fun".

Jim Kakalios, the author of The Physics of Superheroes, has written an article on the physics of Thor's hammer. I think what I am more interested in is the details trying to explain the initial inconsistencies of what was seen (such as the hammer appearing to be too heavy for everyone to lift, yet, it isn't so heavy that it crushed the books and table that it was resting on). I think that is more fascinating because in many storyline, such inconsistencies are often either overlooked or simply brushed aside. To me, that is where the physics is, because someone who notices such inconsistencies are very aware of the physics, i.e. if such-and-such is true, then how come so-and-so doesn't also occur?

Labels: movies, Sci-Fi, The Physics Of

The 2014 Newton Lecture given by Deborah Jin, who to me, already deserves a Nobel Prize in physics.

Rhett Allain has a very good article that is full of advice and suggestion for students having problems with their physics classes.

This is what he has to say when students tell him they just don't understand physics.

This is something I often hear students say around the midterm. The truth is that no one “just understands” physics. No. Instead, physics is the result of a battle. There is battle in your head between common ideas and new ideas. There is a struggle in your mind and on your paper about finding a strategy to solve a problem.

You can’t just “get physics” by going to class. Understanding in physics only comes (for just about all of us) through sweat and tears. You have to do the homework. You have to go to class. You have to read the textbook. This isn’t drive-thru learning. If you aren’t putting in the time, you are going to make progress.

This is similar to what I've said all along on here, that you just can't sit and read a book on physics and hope to understand it. What you may have understood is something superficial. The only way to grasp the knowledge is by solving a bunch of problems, making mistakes, and learning from them. That is the only way to get a feel of the essence of what you are learning. I've always used the analogy of learning how to ride a bicycle. You can read and hear people tell you how to ride a bike till you're blue, but you'll never acquire the skill to ride it till you actually sit on a bike and practice, practice, practice. You will fall a few times, get a few scrapes and bruises, before you finally get it.

The same thing with understanding physics.

Posted by ZapperZ at 8:54 AM No comments:

This is the view from the Adanced Light Source at Lawrence Berkeley National Lab. It overlooks the main campus of UC-Berkeley, downtown Berkeley, the bay, and foggy San Francisco in the far background. 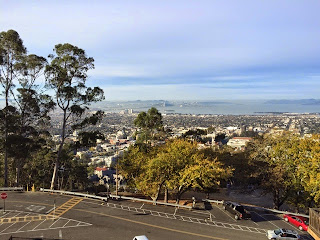