I've used online web applications as supplement or enhancement to the class material, but during the pandemic when we went remote, I relied on them even more. In fact, I remember a couple of days where I did a lot of surfing and searching to find suitable web applications for various activities and topics, simply to catalog on the various things that are out there that I could use for my classes.

Over the months and years, I have a bunch of web applications that I consistently go to that I find to be quite useful. These can either be simulations to illustrate a physical concept, or virtual activities or experiments that mimic what students may perform in a lab.

In a series of posts, I will show what I've used and how each one was used, especially during a remote class. Maybe someone might find one or more of them useful, or might see it being used in a different way. Better yet, maybe someone has a better web application for the same task. I definitely like to hear that!

To start of, here is my most favorite web application to demonstrate the phases of the moon and why we, on Earth, see what we see. Despite the simple-looking screen, this webpage is choke-full of information. The biggest part of the screen shows the location of an observer on Earth, the location of the Moon, and the position of the Sun. You can manually click and drag the observer and the moon to get them to move to any valid position, or run the animation. 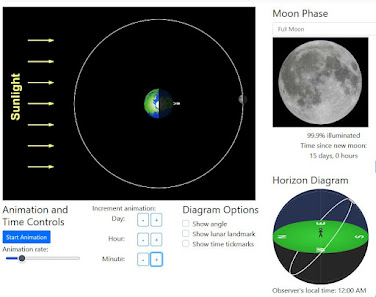 Another example was opportunistic because the Muslim's fasting month started sometime during the semester, and it was a common practice (it still is in many parts of the Muslim world) for people to look for the crescent moon at sundown to signify the start of their fasting month. So I also ask for when is it most likely to see a waxing crescent at sundown? 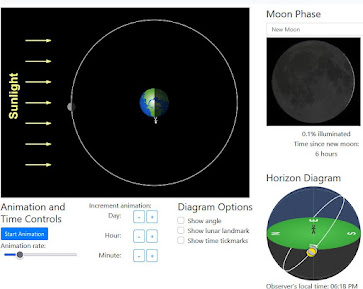 One of the best thing about this app is the ability to make the students realize, if they haven't already, that they should and can see the Moon during the day, i.e. when the Sun is also in the same side of the sky as the Moon! This allows use to discuss the often-mistaken idea that the phases of the Moon are due to the shadow of the Earth on the Moon from the Sun. We can also carry a more advanced discussion on why we don't see eclipses of the Sun and the Moon every month, especially if they have understood what this web application seems to convey.

I've looked at other websites demonstrating and explaining phases of the Moon, but to me, this is the best one out there so far.

Posted by ZapperZ at 8:17 AM No comments:

What An Experiment Can and Cannot Tell You

When classes had to go remote or online due to the pandemic, the biggest issue for general physics courses was, among other things, the labs. These courses were not designed to be done remotely, and so the labs could not simply be adopted for remote learning. This is in contrast to online general physics courses that were designed to be done remotely and have lab kits designed for such courses.

I had to resort to using virtual web applications and simulations at first, making extensive use of the PhET website, until I discovered Pivot Interactives. But this is not about that. Rather, I also had to think a little bit of actual activities that a student could do using simple, household stuff, that can either be their "experiment", or a supplement to any simulation or online labs that they did.

When we started a topic on electric charges, I used this as an in-class activity to supplement the lecture as a demonstration of static charges. When we went remote, I changed it so that it became an experiment that the students could do at home because it uses only one thing: sticky cellophane (Scotch) tape. I'm sure this is familiar to many people, but I'll describe briefly what is involved.

You take 4 strips of sticky tape, each about 6 inches long. Fold under one end of each tape so that that end doesn't stick to anything and acts as a convenient handle.

Do the same for the other two tapes, but mark them as "B2" and "T2" for bottom and top tape 2, respectively. You should end up with something similar to the picture above.

Now take T1 and rip it off B1. Stick the sticky, unfolded end of T1 to the edge of the table so that most of the tape hangs freely.

Pull tape B1 off the table. Hold B1 at the folded end and let it hang down freely. Slowly, move it closer to tape T1 but don't let them touch. What do you see?

Next, attach the sticky, unfolded end of B1 to the edge of the table, very much like what was done to T1.

Hold T2 at the folded end and let it hang down freely. Once again, slowly move it closer to T1 and observe. Repeat this by moving T2 closer to B1 and observe.

Attach T2 to the edge of the table again, the same as what you did with T1 and B1.

So that is the entire "experiment". The students had to describe clearly what they observed. I emphasized that this part should be just observational. I was not looking for explanation yet. The aim here is to distinguish between observations, which if valid are "facts", versus explanation which can be interpretation based on our understanding.

If the experiment was done carefully, the observation should be like this:

Now, if given NOTHING ELSE, this is as much as you can say about what you can get out of the experiment. But somehow, every single time I've had students do this, a few of them inevitably went a step further (or maybe a step too far?) and managed to conclude that tapes T1 and T2 have a particular type of charge (say, negative), which means that B1 and B2 tapes have positive charge. I don't quite know how they arrived at this conclusion.

Rather than just telling them that they were "wrong" in the sense that they could not deduce the nature of the charge just from the experiment alone, I decided to use this as a class discussion topic. My main question was that, to what extent can you squeeze all the information out of an experiment based on the observation, and when have you gone a bit too far?

I then asked the students if they can suggest what we can do next to actually determine the type of charge on each tape. Certainly, if we have a "reference" charge, something that we know that has a particular type of charge, then this can certainly be used to determine the type of charge. For example, rubbing wool onto a glass rod has been shown to induce a net positive charge on the rod. So the rod could be used as a reference. But I asked the students whether it is necessary to use this reference charge on ALL of the tapes, i.e. check what happens if they bring this reference charge to each individual tape. The purpose here is to use the inductive deduction, where one only needs to check with just one tape, and knowing that tape's relationship with the others, automatically determines the type of charge on all of them.

This very simple exercise, and the lessons that can be learned from it, have huge implications to our world today. This is because a lot of people have a lot of problems deciphering and distinguishing between valid facts and conclusions/speculations. Often times, those two are intermingled until one can no longer tell which is which. I've seen people arguing about the conclusions, and somehow, that undermines the validity of the facts that they were based on, very much like wagging the dog. Even worse, when the "facts" are shown to be flawed or discredited, somehow the conclusions that were based on those facts remained alive and well!!

As science educators, we need to make a conscious effort to impress upon the students that science education is not just about learning the science. It is also learning how to think and the process of making systematic and rational deduction based on the nature of the facts.

First of all, a clarification for those who are not aware of this. The term "accessible" as used here in the US within this context tends to refer to accessible to people with disabilities.

This is a report or maybe a White paper by a committee given the charge by the American Association of Physics Teachers (AAPT) to study how we can make physics labs in schools more accessible to students with various types of disabilities. I have read through it rather quickly, and I intend to read it some more when I have the chance (I've only stumbled upon it today).

Let me just say that for most physics college instructors, especially in Ph.D-granting institutions, there is very little training and awareness of the issue of accessibility of the physics courses that are taught, much less the consideration of making physics labs accessible to people with various types of disabilities. I myself was ignorant of such things until I decided to be trained as an online instructor during the COVID shutdown. It was during such training that the idea of accessibility and designing a Learning Management System (LMS) page and course material that are accessible came into my conscious awareness. So now, almost everything I post to the course's LMS page, and almost all the online material that I distribute tend to pass an accessibility evaluation, even when none of my students needed them to be.

However, those are the only things I'm capable of doing. I still struggle in trying to figure out how to make some of the more complicated figures, graphs, etc. to have the accurate alt-text to accompany them. I still am not sure how these document readers translate mathematical equations, and whether this is done accurately. And of course, the issue of how to make lab accessible to a student who can't see, can't hear, can't lift or grab something, can't walk, etc. goes way beyond my pay grade! This is not something that is easy to solve and most likely require department-wide or even institution-wide support and involvement. It will also involve quite a sizeable funding if we have to retrofit and install devices, software, etc. to existing physics lab equipment.

I'm not going to lie, I find this goal to be an exceedingly difficult task to accomplish. As an experimentalist by training, my philosophy for lab work is not just about the data-collection, but also the act of physical assembly of the equipment, following and understanding the instruction, problem-solving and making diagnostics when things don't seem to work as they should, and being creative at figuring out what causes what. I don't know how to accomplish all of this and still make the physics lab accessible to all students regardless of the type of disabilities that they have. The gist from the document that I referred to only gave superficial ideas and recommendations.

Maybe this is the lighting of the fire to start the pot to boil. I hope it is because I see a huge amount of problem-solving work to make the general physics lab more accessible and still manage to hit all the student learning goals.

Posted by ZapperZ at 4:58 PM No comments: