I've seen this episode of America's Test Kitchen before. It is Ep. 1 of Season 19. However, during a recent rerun of the show, I did a double take when I read the description of the show being displayed on my TV menu guide: 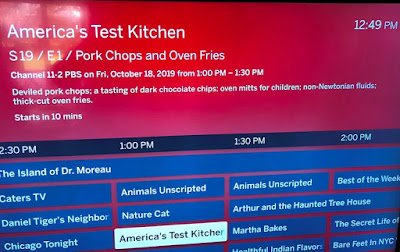 There as an entry that said "non-Newtonian fluids".

Like I said, I've seen this show before, at least twice, and I don't quite remember them mentioning this type of phenomenon.

When I saw the show again, I realized what it was. They had a "Science" segment on "fluids" such as ketchup and liquid thickened by corn starch. These two are common examples of..... you guessed it ... non-Newtonian fluids.

But interestingly enough, no where in the show or during this segment, did any mention of the phrase "non-Newtonian fluids" ever appeared. It was odd that they would discuss the phenomenon, but not mention the name given to it. Yet, it appears on the description for this episode. At the very least, giving the phenomenon a name not only allows someone who wants to know more about it something to Google on, but also relates known physics to a common observation.

Or maybe they don't want to mention it so as not to scare away their audience?