The Physics of Texting And Driving

First of all, let me be clear on this. I hate, HATE, HATE drivers who play with their mobile devices while they drive. I don't care if it is texting (stupid!) or just talking on their phones. These drivers are often driving erratically, unpredictably, and often do not use turn signals, etc. They are distracted drivers, and their stupid acts put my life and my safety in jeopardy. My nasty thought on this is that I wish Darwin would eliminate them out of the gene pool.

The physics is quite elementary that even any high-school physics students can understand. And now, I am going back to my happy place.

What Non-Scientists Can Learn From Physics

Chad Orzel has a follow-up to his earlier article on what every physics undergrad should know. This time, he tackles on what he thinks non-scientists can learn from physics.

You may read the linked article to get everything, but I have a different track in mind. Sticking to students rather than just a generic non-scientist, I'd rather focus on the value of a physics education for both scientists and non-scientists alike. After all, many non-physicists and non-scientists are "forced" to take physics classes at various levels in their undergraduate education. How can we motivate these students of the importance of these classes, and what can they learn and acquire from these classes that will be useful to them not only in their education, but also in their careers and life?

I of course tell them the relevance of physics in whatever area that they major in. But even non-scientists, such as an arts major, can acquire important skills from a physics class. With that in mind, I'd like to refer to the NACE website. They often have a poll of potential employers and what they look for in new graduates that they are considering to hire. In particular, they were asked on what type of skills they tend to look for in a candidate.

The result can be found here.

I have extracted the info in this picture: 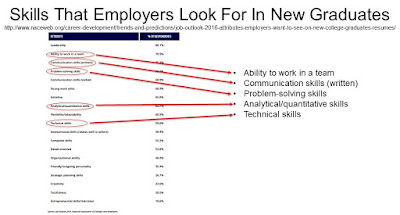 I often show this to my students because I highlight all the skills that we will employ and honed in a physics class. I tell them that these are what they can acquire out of the class, and to be conscious of them when we either tackled a physics concept and problem, or when they are working on an experiment. In fact, often times, I often try to get them to think on how they would approach a problem in trying to solve it, with the intention of emphasizing analytical skills.

I think as physics teachers and instructors, we often neglect to show the students the non-physics benefits of a physics class. A student, whether he/she is a physics, engineering, other science, or STEM major, can ALWAYS again an advantage if he/she has those skills that I highlighted above. This is why I've often emphasize that the skills that can be acquired from a physics class often transcends the narrow boundary of a physics topic, and can often be valuable in many other areas. These skills are not subject-specific.

I often notice the irrational and puzzling argument on TV, especially from the world of politics, and I often wonder how many people could benefit from a clear, analytical ability to be able to analyze and decipher an issue or an argument. So heck yes, non-scientists can learn A LOT from physics, and from a physics class.

Hey, good for her!

The moderator of this panel interrupted physicist Veronika Hubeny of UC-Davis so much that audience member Marilee Talkington (appropriate name) got so frustrated that she intervened.

While watching a panel titled “Pondering the Imponderable: The Biggest Questions of Cosmology,” Marilee Talkington noticed that the moderator wasn’t giving physicist Veronika Hubeny, a professor at UC Davis and the only female on the panel, her fair share of speaking time.

So when the moderator, New Yorker contributor Jim Holt, finally asked Hubeny a question about her research in string theory and quantum gravity, then immediately began speaking over her to explain it himself, Talkington was furious.


Fed up with the continuous mansplaining, Talkington interrupted Holt by yelling loudly, “Let her speak, please!” The crowd applauded the request.

You can read the rest of the story here.

Certainly, while it is awfully annoying, based on what Dr. Hubeny described, she didn't think it was a blatant sexism. Rather, she thought that the host was just overly enthusiastic. But you may judge that for yourself if the host didn't give the only female member of the panel a chance to speak.

But yeah, good for Ms. Talkington for intervening.

Don Lincoln takes you on a historical tour of Fermilab as it celebrates its 50th Anniversary this year.

Planning For A Future Circular Collider

The future of the next circular collider to follow up the LHC is currently on the table. The Future Circular Collider (FCC) is envisioned to be 80-100 km in circumference (as compared to 27 km for the LHC) and reaching energy as high as 100 TeV (as compared to 13 TeV for the LHC).

Now you may think that this is way too early to think about such a thing, especially when the LHC is still in its prime and probably will be operating for a very long time. But planning and building one of these things take decades. As stated at the end of the article, the LHC itself took about 30 years from its planning stage all the way to its first operation. So you can't simply decide to get one of these built and hope to have it ready in a couple of years. It is the ultimate in long-term planning. No instant gratification here.

In the meantime, the next big project in high-energy physics collider is a linear collider, some form of the International Linear Collider that has been tossed around for many years. China and Japan look to still be the most likely place where this will be built. I do not foresee the US being a leading candidate during the next 4 years for any of these big, international facilities requiring multinational effort.