What Is A Plasma?

I love the Chicago's Museum of Science and Industry (MSI). In fact, I am a member and a donor to the museum. So let's get that out of the way first.

Secondly, I know how difficult it is to explain scientific concepts to the public. The need to use simple words and terminology, AND, make it accurate can be a daunting task.

Still, I can't help but be a bit disappointed by this sign that I saw at MSI this past week. Granted, this was in the gift store, but still, for an institution promoting science, this falls a bit short.

The sign accompanies one of those "plasma arc ball" thingy that they were selling: 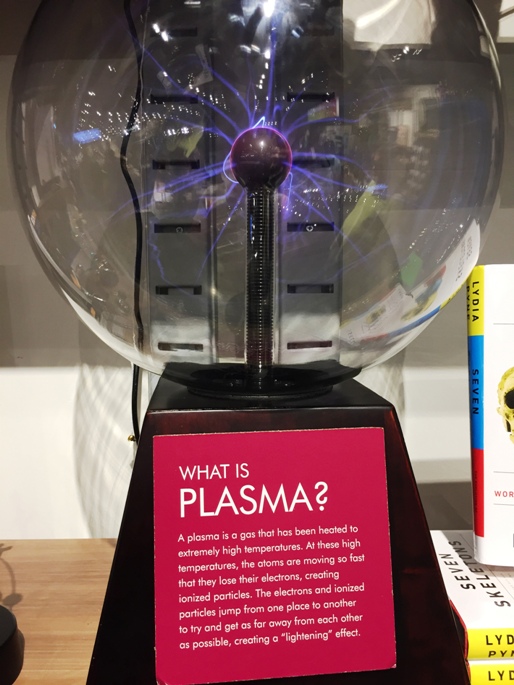 
There are problems with this description.

3. The description that "... The electrons and ionized particles jump from one place to another to try and get as far away from each other as possible, creating a "lightening" effect.... " is extremely puzzling and, frankly, irrelevant to the description of what a plasma is. In fact, if you think about it, when an atom is ionized, it has a net positive charge. An electron, having a negative charge, would tend to want to go back to the positively-charged ion. So why would they want to "... get as far way from each other as possible..."?

So what is a plasma? If, say, someone at MSI who isn't a physicist needed to make this sign, and Googled it, he/she will see several definitions. I'll pick one (the bold is mine).

Plasma is the fourth state of matter. Many places teach that there are three states of matter; solid, liquid and gas, but there are actually four. The fourth is plasma. To put it very simply, a plasma is an ionized gas, a gas into which sufficient energy is provided to free electrons from atoms or molecules and to allow both species, ions and electrons, to coexist. The funny thing about that is, that as far as we know, plasmas are the most common state of matter in the universe. They are even common here on earth. A plasma is a gas that has been energized to the point that some of the electrons break free from, but travel with, their nucleus. Gases can become plasmas in several ways, but all include pumping the gas with energy. A spark in a gas will create a plasma. A hot gas passing through a big spark will turn the gas stream into a plasma that can be useful. Plasma torches like that are used in industry to cut metals. The biggest chunk of plasma you will see is that dear friend to all of us, the sun. The sun's enormous heat rips electrons off the hydrogen and helium molecules that make up the sun. Essentially, the sun, like most stars, is a great big ball of plasma.

I'm not sure how many of MSI guests paid attention to the sign or learned what a plasma is from that sign. But I hope those responsible for such signs pay closer attention to the accuracy of the info that they put out.


At the risk of being thought a pedant, there are more than 4 states of matter, although how many depends on how you define what a state of matter is. See Wikipedia https://en.wikipedia.org/wiki/State_of_matter for a summary.

I'll get my coat.