If you are not aware of my own pet project, this post will get you up to speed.

It has been a while since I updated this series, but better late than never. For this one, I'm going a bit against my own philosophy that physics just doesn't say what goes up must come down, but also when and where it comes down. For this exercise, I'm sticking with just the "what goes up must come down" part, i.e. only the qualitative aspect, not the quantitative aspect. But I have a good reason for it. It is because, in my experience, students often have a tough time understanding the concept itself, and I often found myself having to spend a considerable amount of time on this before I could proceed to the quantitative aspect of it. So in this exercise, the main idea is to make the students understand the concept and not worry about the "numbers" yet.

The topic of this exercise is Lenz's Law. This "lab" can actually be done either with real equipment in a laboratory setting, or done using a virtual setup. The PhET virtual setup for Faraday's Law is perfectly suited for this:

If you are doing this as a real experiment, you will need a solenoid, a bar magnet, a galvanometer with the "zero" position at the center of the scale, and some connecting wires. I've used a tightly-wound homemade solenoid, and it works fine. Note that you will need to know the direction of how the solenoid is wound (i.e. you need to be able to see the windings) so that you can figure out the sense of rotation of any current flow in the solenoid.

For this exercise, I will use the PhET simulation. I have used this as part of my in-class lecture on this topic, since every student in my class has a laptop or tablet and can access the PhET website during class. And yes, they were reminded to bring those devices to class for this topic. 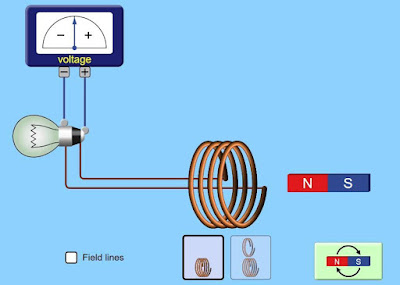 Let's start with the aim of this exercise: It is to let students figure for themselves a "general rule" on when there is current in the circuit, and the direction of this current.

Keep in mind that the whole principle of this revamped lab idea is that the instruction is kept to a minimum, the students do not need to know the actual physics concept or principle, and we let them discover or learn about the phenomenon for themselves. So with that in mind, my only instruction to the students is this:


I give them a bit of a guideline, especially for those who are a bit clueless on what to do.

If this were done as a real experiment, I required the students to write exactly what they did and what they observed at every step.

What this exercise does is (i) to force students to think analytically on how to understand and make sense of what they observe and (ii) to get the students to communicate clearly what they understand in their heads into written form. Both of these are invaluable skills, and not just in physics. The second part is not as trivial as you think, because I find that a lot of students still have not mastered the art of conveying something in their heads via written communication (students who are not native English speakers will have a tougher time with this part so they may need extra assistance).

In my lessons, I introduce Lenz's law as the "qualitative" description, and then follow it up with Faraday's Law as the "quantitative" description of the same phenomenon. In addition to showing how Faraday's law "explains" Lenz's law, it will also allow you to explain why the galvanometer deflects with different amplitudes depending on how fast you move the magnet in or out of the solenoid. But this is one as part of the class lesson rather than as part of the lab exercise.

I toyed with the idea of putting the "answer" here (it is not as if one can't google for it), but I'm going to leave it out for now and let any interested party try it out. I will update this post at a future date to include my version of the "general rule" that reflects what Lenz's law says.