So bear with me. I'll explain the point of this trivial-looking exercise at the end.

A student is given a circuit containing a variable power supply, a resistor, and an ammeter all in series, and a voltmeter attached across the resistor. The student is then asked to determine, as accurately as possible, the resistance of the resistor.

Knowing that Ohm's Law stated that V=IR, the student made a series of measurement of potential difference (V) versus current (I) on the resistor. The student end up with this data set: 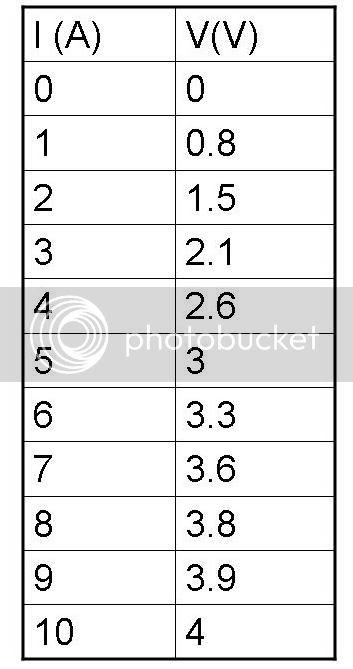 Using Ohm's Law, he knows that the slope or gradent of PD versus I will give him the resistance of the resistor. He then enters these numbers into his data analysis program, runs a linear line fit routine, and it spits out the value of the slope that he wants, which is ~0.4 Ohm.

Sounds alright, doesn't it? However, there is one MAJOR problem with this. Can you describe what it is? You may assume that the voltmeter, ammeter, and power supply are "ideal", meaning they do not contribute to the accuracy or inaccuracy of the measured values.

So, I gave that as a trivia quiz on Physics Forums a few weeks back. I'll provide the answer below, so if you want to work it out yourself before looking at the answer, don't scroll down any further.


A quick glance at the plotted data reveals that it is not a straight line. Fitting a straight-line to those data does not make an accurate representation of the behavior of the data. So the data analysis is faulty. Applying V=IR in this case is no longer valid since there is no longer a linear relationship between V and I, with R being a constant.

There is a long story associated with this, and why I asked this question. When I was a lab TA during my graduate school years, we had a typical lab on finding the spring constant using a set of weights. One time, I added a second spring that was deformed to each group's equipment and required that they try to find the spring constant of that as well. Well guess what? Most of the students in the class simply dumped the data into the linear regression program, let it spew a result, and that's that, regardless of the fact that if they examine the plot, they would see that the relationship between F (applied mass on the spring) and x (extension of the spring) was no longer linear! Only a few of the students actually commented in their report on this.

The moral of the story here is that the software you use can do many things, and it WILL spit out a number for you. However, it doesn't mean that that number has any meaning or is a valid result based on the relationship shown in the data.