Before all this mess with the coronavirus came up, I got the chance to wear these two t-shirts to my class when I was teaching resistance/circuits, and when I was teaching magnetic fields. These two are in addition to the other geeky t-shirt that I mentioned last time. 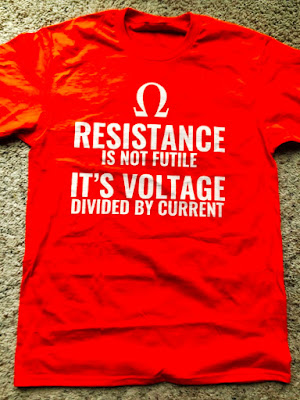 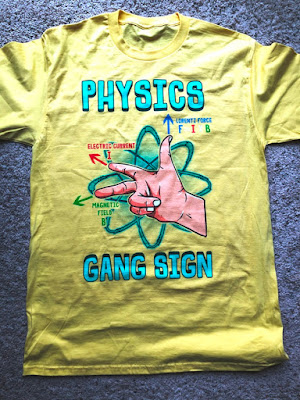 I'm thinking of buying more for a couple of different topics that I will be covering, but who knows when I'll get to wear them again in a class setting. I suppose I can wear them when I run my Zoom class session, but who gets to see the full effect of it when all you want to show is your face.

Zz.
Posted by ZapperZ at 11:11 AM No comments: Links to this post

I'm sure everyone involved in course instruction is facing the same issue. The past 2 weeks have been rather hectic as I rush to reform the course and adapt it to a purely online course. It is certainly more daunting and more of challenge for science courses that have lab components.

I find myself not struggling as much as a few of the other faculty members that had never taught anything remotely or online. I've had some experience in teaching blended or hybrid courses, so I have had experience with conducting either asynchronous courses, synchronous courses via video-conferencing app such as WebEx. So for me, the work involves adapting my material that was meant for an on-site course into something more suitable for an online course.

As for the labs, I already have a collection of "virtual labs" that I had written previously that make use of the various online experiments such as the ones fro PhET, etc. So those actually require only minor rewrites and tweaks and they are good to go.

My main struggle and something that I still find a bit dubious, are the exams. I still do not believe that students will not cheat if they can when doing online tests and exams, no matter how much one tries. This is my main issue with any online courses, the ability to determine if the work was truly done by the student him/herself. I have heard many anecdotal cases where for the same course and same exam, students who took the online version scored significantly higher exam scores than the students who took the exam in class. So make your own conclusion there. I've written my exams in such a way that the questions are somewhat "unique" and can't be easily "googled". But there is no way to prevent the student from having someone else helping or even outright doing the exam for him/her. At the end, there is only so much one can do given the circumstances.

As of now, all I'm trying to do is survive the remainder of the semester with the new workload, and to stay healthy. I wish the same for all of you as well.

Freeman Dyson has died at the age of 96.

Many anti-academia often used him as an example of being able to do physics without a PhD. But really, how many people are as gifted and as brilliant as he is? He was part of academia, because that was where he worked, and using him as an example is like planning your life as if you'll win a lottery.

Dyson's legacy will go on long after he is gone.

Zz.
Posted by ZapperZ at 9:33 AM No comments: Links to this post

By now, I'm sure those of you involved would have heard the news of the cancellation of the APS March meeting this year due to the coronavirus issue. For those of you who don't know, the APS March meeting is the LARGEST yearly physics conference in the world, attracting more than 10,000 physicists from around the world over a week of intellectual discussion and presentations.

This cancellation is quite unprecedented, because I do not remember the last time this has happened, if it has ever happened. So this is quite a big deal. I'm sure there's a lot of people impacted by this, especially in terms of travel and accommodation cancellations and fees.

No news yet on what will happen to the APS April meeting, which is looming in the very near future.

If you are affected by it, I'd like to hear it. Luckily (or unluckily), I wasn't going this year, so I don't have to deal with the mess.

Zz.
Posted by ZapperZ at 9:25 AM No comments: Links to this post

I made a post quite a while back on "Quantum Entanglement for Dummies" that tried to describe what it is. I emphasized the fact that this phenomenon is different than classical physics because of one every important characteristics of quantum mechanics, which is the superposition principle that is built into the quantum wavefunction. So to be able to understand why quantum entanglement exists and why it is so "spooky", one must first understand the superposition concept.

Don Lincoln has produced a video on quantum entanglement, and if you pay attention closely, he starts off with describing the superposition concept and how that made a quantum system not "predetermined" before a measurement. He also give a good overview on a Bell-type measurement that shows how experiments agree with QM description but not the hidden variables scenario.

A good video to start you off on understanding this phenomenon.

Zz.
Posted by ZapperZ at 12:29 PM No comments: Links to this post

State of the Art of MRI

This is a very good article from Physics Today on the history and development of Magnetic Resonance Imaging, which has become ubiquitous in medical diagnostics. Of course, this came out of the discovery of the nuclear magnetic resonance phenomenon, a technique that itself came out of our understanding of quantum mechanics.

When you read this article, pay attention to how it is continuing to be developed, to evolve, and its continuing improvement. Medical physicists are still actively improving this, and other aspect of the medical field by incorporating things that physicists already know and use. Without advancement in physics, both theoretically and experimentally, there is nothing to trickle down from to the medical field.

Zz.
Posted by ZapperZ at 10:25 AM No comments: Links to this post

This is a fascinating paper[1] (which I'll be reading more of in the next several weeks). But for now, I'll just highlight it here.

The authors found that charge fluctuation in a "strange metal" antiferromagnetic compound exhibit a scaling of f/T (frequency over temperature) in the optical conductivity, which often indicates the presence of a quantum critical point.

If anyone has done MBE before, you'll know how tedious and difficult it is to synthesize a material such as this, and have it be pristine enough to produce these effects that can be measured, at a THz level, no less!

There are many implications here, not the least of which is that the cuprate high-Tc superconductors share the same "parent" or undoped state, being antiferromagnetic perovskites themselves. There have been experiments indicating that the cuprates superconductors are also influenced by their proximity to a quantum critical point.

This is another example where some of the most fundamental aspects of quantum mechanics, in this case the concept of quantum criticality, can often be clearly manifested in a condensed matter system, not in elementary particle physics experiment.

What Really Happened At The Big Bang?

Don't you want to know?

Zz.
Posted by ZapperZ at 10:33 PM No comments: Links to this post

Thirteen tips for engaging with physicists, as told by a biologist

This is a rather fun reading, and it has a bit of truth if we (physicists) do a bit of self-reflecting on how we operate.

I think I'm going to post the link to the LMS for the general physics course I'll be teaching this Spring for Life Science/Pre-Med majors. 😄

And then there's a reverse flow, where you get 12 tips for engaging with biologist, as told by a physicist. Even a lot more self-reflection there!

In the end, biologists and physicists gain a lot from talking to each other.

Zz.
Posted by ZapperZ at 9:44 AM No comments: Links to this post

I was at the Chicago Museum of Science and Industry this past weekend, and got to see the Tesla Coil presentation. I've seen this several times, but it is always a hoot, so we never miss it every time we are there.

Strangely enough, this is the first time I've recorded a video of it, so here it is.

Zz.
Posted by ZapperZ at 7:47 AM No comments: Links to this post

What Is Quantum Mechanics Really All About?

Don Lincoln tries to explain what QM is to non-expert. Do you understand, and buy it?

Zz.
Posted by ZapperZ at 1:43 PM No comments: Links to this post